By IBRAHIM JOUHARI, Lead Advisor of the Electoral Lab at IFI
103 lists were officially registered for Lebanon's 2022 parliamentary elections, vying for 128 parliamentary seats in 15 districts.
​Most political parties waited until the last moment before unveiling their lists. Negotiations were still ongoing hours before the close of the registration period. All sides kept their cards hidden for as long as possible, maximizing their strength and weakening their opponents.

There was a significant upsurge on the last day, and the final number of lists rose to 103, up from 77 in 2018. Most districts witnessed the registration of 1 to 3 additional lists, with only one district, South III, bucking the trend and dropping from 6 registered lists in 2018 to 3 in 2022. 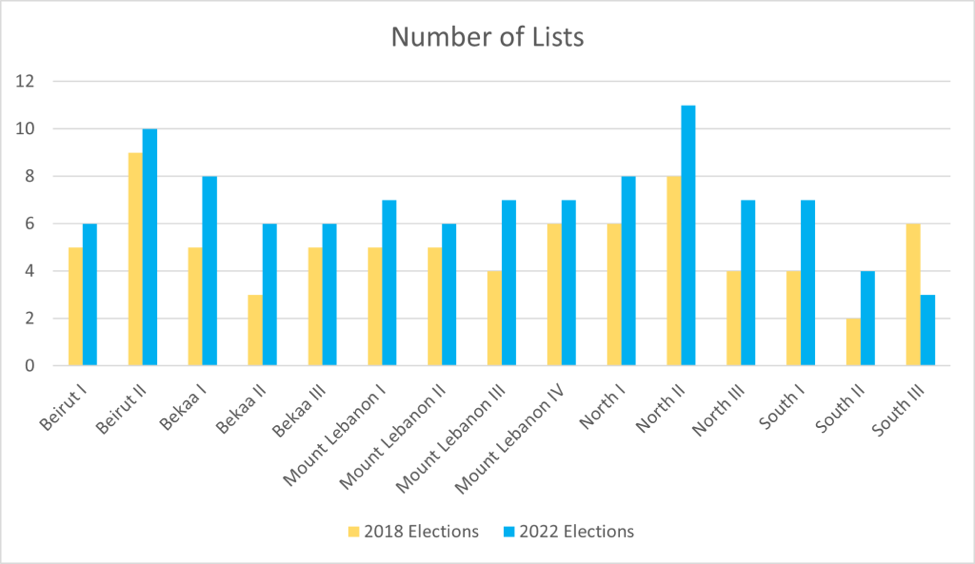 The districts that witnessed the highest number of additional lists, or +3 from 2018, were Bekaa I, Bekaa II, Mount Lebanon III, North II, North III, and South I.

One possible explanation for the upsurge in the number of lists is that PM Saad Hariri and Future Movement's withdrawal from the elections increased the competitivity of the districts with large Sunni majorities or pluralities, encouraging more candidates to run. Indeed, there was a sizable Sunni majority or plurality in four out of the six districts with +3 lists. (Bekaa II has a 48% Sunni majority, North II is at 88%, and South one is at 47%.) Moreover, in Tripoli and Beirut, two additional lists were formed that included ex-Future Movement candidates, increasing the list number overall.
​
However, it is essential to point out that although the number of candidates increased in 2022 to 1043 from 999 in 2018, the number of Sunni candidates did not witness any significant increase. The number of initial candidates was further reduced when the lists were formed, and many did not find any place in them, and their candidacy was nulled. All historical analysis was performed using raw and detailed electoral data collected and made available through the Data Liberation Project. 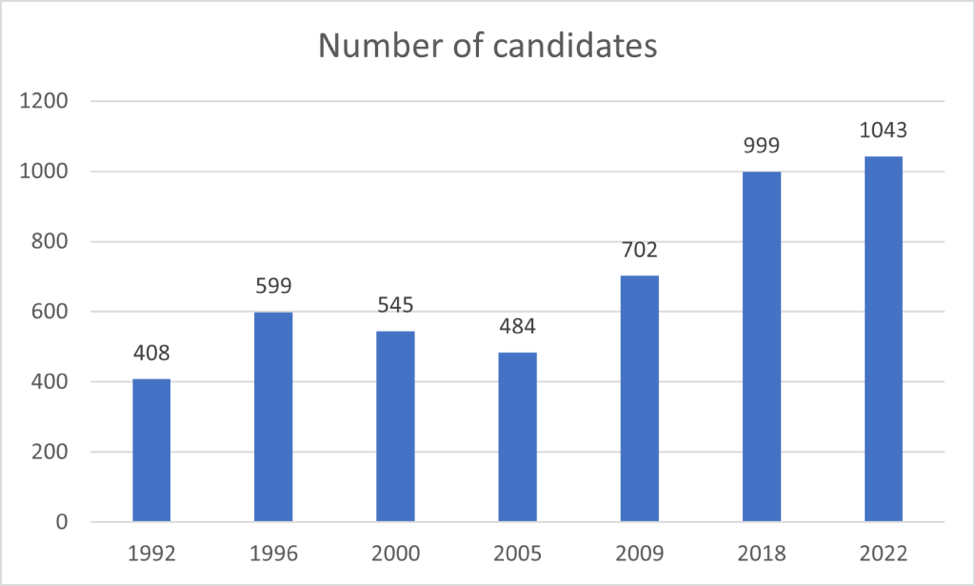 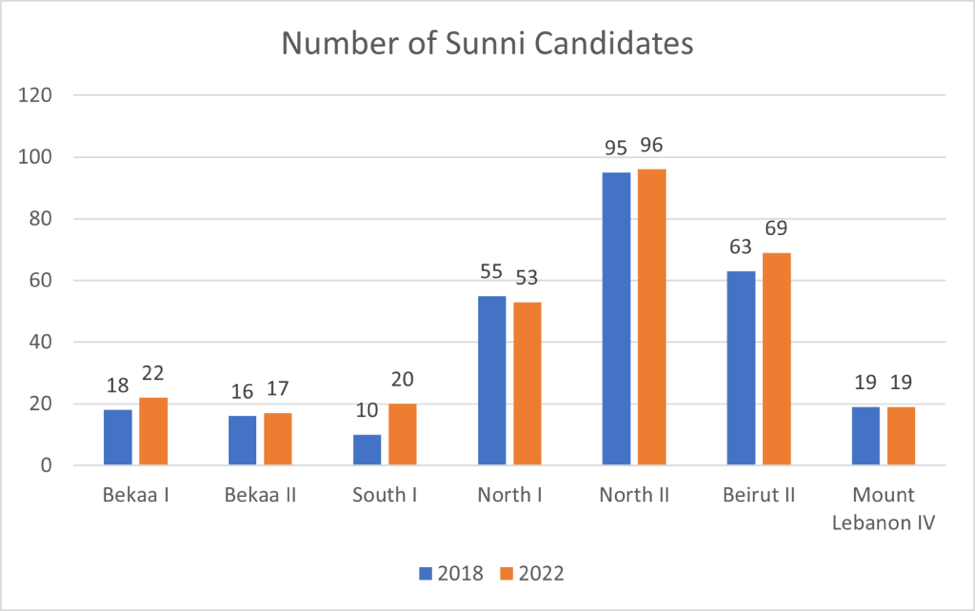 Moreover, the large traditional parties' coalitions that dominated several areas previously were broken up (for example Mawad and FPM alliance in North III or the large FPM and independent candidates alliances in Mount Lebanon II). Additionally, two possible presidential candidates, Mr. Gebran Bassil and Mr. Suleiman Frangieh are engaged in a fierce battle to control the maximum seats in the North III districts to strengthen their claim for presidency. Indeed, the two contenders are putting on the line their political survival in that battle, and no expenses are spared.

Meanwhile, another reason why 23 additional lists were registered is the exuberance of emergent parties and their unfortunate disunity. In all but South III district, emergent political forces (or what used to be called civil society) have fielded three or more lists. In certain districts, like South I (Saida-Jezzine), it reached four, and Beirut II and Tripoli reached a mind-boggling 5.

It is important to note that the current Lebanese electoral system is proportional, thus, a multiplication of lists would inevitably lead to the failure of many of them to reach the threshold and not win any seats. The number of lists in many districts indicates clearly that emerging parties have failed to unite under one list especially in their urban strongholds of Tripoli, Beirut I & II. This might lead, once again, to their defeat and a repeat of the very low results for emerging parties in 2018, when they only achieved 2.5% of the vote and won one seat. Indeed, the Lebanese electorate is politically savvy, and presenting such a divided field can only indicate an inability to organize and coordinate, or in other words, an inability to govern.

However, there have been some efforts to highlight several prominent lists in certain districts, portraying them as "the real alternative lists," trying to create momentum around them and recover some international and expatriate support and funding. Incidentally, South III, a Hezbollah stronghold, was the only district with a lower number of lists in 2022 and witnessed the only unification of emerging parties under one strong list. It will be very interesting to follow up and study this district's results as it might show what could have happened if emerging parties were able to unify their candidates in one or two strong lists all over Lebanon.

​Opinions expressed in these articles are those of the author and do not necessarily reflect the views of the Issam Fares Institute for Public Policy and International Affairs at the American University of Beirut.
​
​About the Electoral Lab
The Electoral Lab is a new research initiative launched by the AUB Issam Fares Institute for Public Policy and International Affairs (IFI) with the support of the Friedrich Naumann Foundation (FNF) Lebanon. The lab aims to raise awareness about political discourse around elections both in content and form in Lebanon and the region. It seeks to highlight important thematical subjects that are rarely discussed during the electoral cycle and increasing public awareness of the importance of public data, especially electoral results. This initiative focuses on three main themes: conversation and dialogue with different political stakeholders, deep thematical analysis, and spreading awareness and availability of open electoral data.